Congratulations to Marsh Hawker Eileen R. Tabios for releasing her first novel, DOVELION: A Fairy Tale for Our Times. The public is invited to her book's virtual launch tomorrow (Saturday, April 3)--for more information, go HERE. While the book is a novel, Eileen also considers it a “poetic text,” which explains the presence of so much poetry—and Marsh Hawk poetry—in her book. Here’s a summary of the relationship between Eileen’s novel and Marsh Hawk (& other publishers') poetry collections: 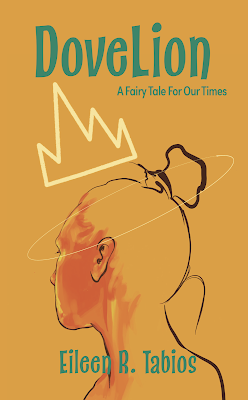 "Another interesting element about Eileen’s DOVELION is how she incorporates elements of her life within the novel’s narrative. // Yet Eileen says that autofiction was not what she had in mind in creating DOVELION. Instead, she says she was trying to manifest 'Kapwa' in terms of the notion of the interconnection of all things. As a result, she says, she wanted to eliminate the barrier between the life inside the book versus outside of the book. 'Like in some theater when the actors walk off the stage and continue the play’s actions amidst the audience members,' she explains. 'I wanted to acknowledge the connection—by eliminating a division—between author and story and, later, story and readers.'”

For years, Marsh Hawk Press poet Eileen R. Tabios wrote short stories that integrated poems. Most of the stories remain unpublished for not meeting her own standards for publication. But having released her first novel, DOVELION: A Fairy Tale for Our Times (ACBooks, New York, 2021), Eileen now considers those old short stories as exercises for her novel. The publisher’s book description includes this summary about the primary protagonists:

In this inventive, multi-layered novel, poet Elena Theeland overcomes the trauma of her past to raise a family who overthrows the dictatorship in Pacifica. She is aided by artist Ernst Blazer whose father, a CIA spy, instigated the murder of Elena’s father, a rebel leader.

DOVELION also integrates several poems, most of which were first published in one of Eileen’s Marsh Hawk Press collections. When Eileen describes Elena Theeland's poetry, including poetics, Eileen not only made the character profess her own art poetica views but also featured poems from her Marsh Hawk books. Eileen even ascribed one of the “blurbs” she received for Reproductions of the Empty Flagpole for one of Elena Theeland’s collections noted in the novel:

Eileen says she is pleased by the linkages between her poems and prose—she considers herself a poet who writes novels rather than a novelist. These elements include: 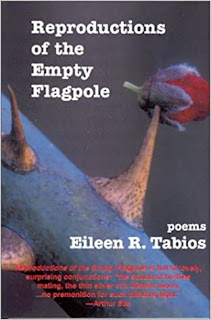 --inclusion of the line “Love is always haggled” which is from her poem “Corolla” in Reproductions of the Empty Flagpole (Marsh Hawk Press, 2002);

--inclusion of the poem “And what is seeing?” which is crafted from the third paragraph of the prose poem “THE COLOR OF A SCRATCH IN METAL” that is in Reproductions of the Empty Flagpole (Marsh Hawk Press, 2002);

--inclusion of the blurb by Philippine poet-fictionist Alfred Yuson for Reproductions of the Empty Flagpole (Marsh Hawk Press, 2002);

--inclusion of both Rapunzel poems in Reproductions of the Empty Flagpole (Marsh Hawk Press, 2002);

--inclusion of the line “It need not take more than one person to bring the world to ruin” which is from the author’s poem “Mustering,” which was written in response to—and inspired by—Eric Gamalinda’s poem “Factory of Souls” which contains the line “It takes just two people to bring the world to ruin.” Eileen’s poem is in Reproductions of the Empty Flagpole (Marsh Hawk Press, 2002) and Eric Gamalinda’s poem in his book, Zero Gravity (Alice James Books, 1999);

—inclusion of a poetry dance performance that is based on “Poems Form/From The Six Directions,” a poetry performance project by Eileen R. Tabios covered in her book I Take Thee, English, For My Beloved (Marsh Hawk Press, New York, 2005);

—inclusion of “Firebird,” an earlier version of which is in Reproductions of the Empty Flagpole (Marsh Hawk Press, 2002); and

--inclusion of a rippled mirror hay(na)ku poem that was published under the title “Ferdinand Edralin Marcos” in The In(ter)vention of the Hay(na)ku: Selected Tercets (Marsh Hawk Press, New York, 2019).

Beyond Life Sentences (Anvil, Philippines, 1998) which is Eileen’s first book;

HIRAETH: Tercets From the Last Archipelago (The Knives, Forks and Spoons Press, 2018);

We are pleased that Eileen’s connection to Marsh Hawk Press permeates her novel and congratulate her again for DOVELION! To further celebrate, we are pleased to share her two Rapunzel poems first published through Marsh Hawk:

She locks the entrance to the turret containing a thousand diaries whose papers are yellowed and leather covers cracked. Then she feeds the key to an alligator. She is outside where ants clamber up the velvet folds masking her thighs (she actually scents grass!). She understands gloves are old-fashioned but has resigned herself to certain constraints:  it takes time for the ink stains on her hands to fade.  But she has crossed the moat. As she peers at the stolid, grey tower that she once draped with her hair, that a man once climbed, she shivers but smiles.

First, she must eliminate her guides. Her godfather—an emperor of two continents and the eagles overhead—has sent a troop of retired generals. She can feel their white beards swaying as they urge black stallions toward her. She can hear the horses gasp as effort glazes a wet sheen over their hides. Though the shimmer of air in the distance simply may be the temper of a summer day, she lifts her skirts and breaks forth into a run.

Once, a man buried his face into her shaking hands. She treasured the alien rush of warmth against her fingers as he spoke of sand, gritty but fine; of waves, liquid yet hard; of ships, finite spaces but treasured for what they may explore; of ocean breezes, invisible but salty on the tongue. "Like the potential for grief?" she asked. He raised his eyes in surprise and she captured his gaze. She pressed on, "I have read that grief is inevitable with joy." Still, she woke one day to a harsh rope dangling from an opened window, and emptiness was infinite by her side.

Now, she is taking the path opposite from the direction she saw the man choose when he departed. As his hands left the rope, he looked up and saw her lack of bitterness framed in the window. The forest respected her grief with a matching silence. But she had learned from the Egyptians how to measure intangible light, a lesson that revealed the earth to curve. Now, she runs and as she begins to gasp, she can feel the sand between her toes, the breezes tangle the long strands of her hair and the waves weight her skirts. And as she begins to feel his ship disrupting the horizon, a sheen breaks across her brow and she feels her lips part. Enrapt, she knows she soon will take off her gloves. Enrapt, she feels she is getting there

After she climbed down the tower, Rapunzel looked at the welts rising on her palms. She had not expected the burn inflicted by the braided rope. Still, she allowed her tears to water the red tracks that began her new journey. For she had learned that bliss is possible only to those who first experience pain. As the salt of her tears stoked the fire in her grasp, she pronounced to the doves she felt lurking among the high branches of surrounding trees: One must fly toward the space where the distance towards the horizon can never be measured.

Once, a man dodged the floating spotlights of her guards to climb towards the window of the turret where she spent her days in velvet gowns, living through words she read behind covers of cracked leather. She was surprised as she had not thrown down her hair which remained pinned under her inheritance of gold combs festooned with diamonds, rubies, emeralds and pearls. "Don't move," he ordered as he walked towards her. "I want to memorize the way you look, before your hair will fall from the pleasure I will teach you." And as the sun's departure stained the sky beyond her window, her hair fell. And her lips parted. And her gown slipped down her shoulders to reveal the silk and lace woven by those who once served her ancestors whose portraits adorned her walls. She looked at her father and nodded slightly to acknowledge the foretelling of a frown the artist had painted on his brow. But her hands rose to grasp the man tighter against her breasts as she whispered: Before the first one, how does one know sin?

The shadow of a dove in flight interrupted her reverie. Her tears ceased and she wiped her palms against the velvet covering her thighs. Then she lifted her skirts and danced down a gravel path whose unknown destiny she did not mind. She danced with a swath of silver butterflies who appeared from nowhere and lingered over her smile. Until an old male dwarf from another fairy tale popped his head from behind a boulder by the bend of the path and asked, "Who are you?"  She proclaimed with glee and pride, "I am Rapunzel." To which the dwarf replied, "Nonsense: Rapunzel has long hair!" And she laughed and announced as she twirled in a circle so that her skirts flared high to reveal her bare legs, "I cut my hair, braided it into a rope, and used it to escape my turret!" Amazed, the dwarf said, "How did you think of that unusual idea?" Rapunzel stopped her dance, fixed a cold stare at the dwarf and hissed like Clytemnestra: When women control their destinies, they are only exercising a law of nature.  How dare you be surprised!