Marsh Hawk Press offers a “Three Questions” Series for its authors to discuss individual titles—an index to the Series is available HERE.  We are pleased to present this Q&A with Martha King and her 2004 book:

1) What is something not known or obvious about your book Imperfect Fit?

The underlying theme of war, the cost of war, the persistence of war’s after-effects. Even I didn’t recognize how strong a current it is until I assembled the poems, which were written over a period of perhaps 15-20 years.

What’s sad is that the two most cherished comments came from people who are no longer on earth: Bob Creeley (noting my work has “ascerbic wit and deft humor”) and  Paul Metcalf’s southernism:  “Lambert Davis’ lil’ daughter Martha sure can be funny about death.”   Otherwise I can’t think of any comments.  The book description on Google Books I wrote myself, which I thought I was giving away with those free-range chickens. It was probably way too indirect. It’s not bad though:

History as content has a sharper feel to more Americans post 9/11. Martha King's work shivers with awareness of mortality and the echoes of history's violence. Wars—even those removed in time by generations—dislocate the present in many of these poems. In others, war is the long loving/hating war of parents and children, or the imperfect fit between human activity and what is called the natural world. These poems, written over the past 20 years, celebrate the ability of humor to squelch sentimental responses and the requirement of wit for free-range chickens.

It’s very hard to do this despite the obvious fact that not all the poems are equally “good.”  I put it the other way and asked myself if there were any poems in this book I wished I had not included.  Somehow the answer is no.  There are reasons for all of them.  As for reprint, alas sheer laziness intervenes. I don’t have electronic copies of these works. They were all on an older computer.  So I’m picking a shorter one, to minimize retyping.

Raleigh, we’ve not been beyond
earshot of builders for ten generations

the wheel is visceral, rolling in blood
the grit is orange
black spots of august
tannic and diesel fuel
hot in my face
your road in America

always the personal—
please bring me health!
I read of an old friend’s death as if
this
road had never been paved

they build my America, Raleigh
Stop for a pipe and discuss it, my red hungry friend

We thank Martha King for participating in this Q&A.  You can visit her at her website with Basil King: KING INK!

Marsh Hawk Press offers a "Three Questions" Series for its authors to discuss individual titles—an index to the Series is available HERE. We are pleased to present this Q&A with Susan Terris and her 2012 book: 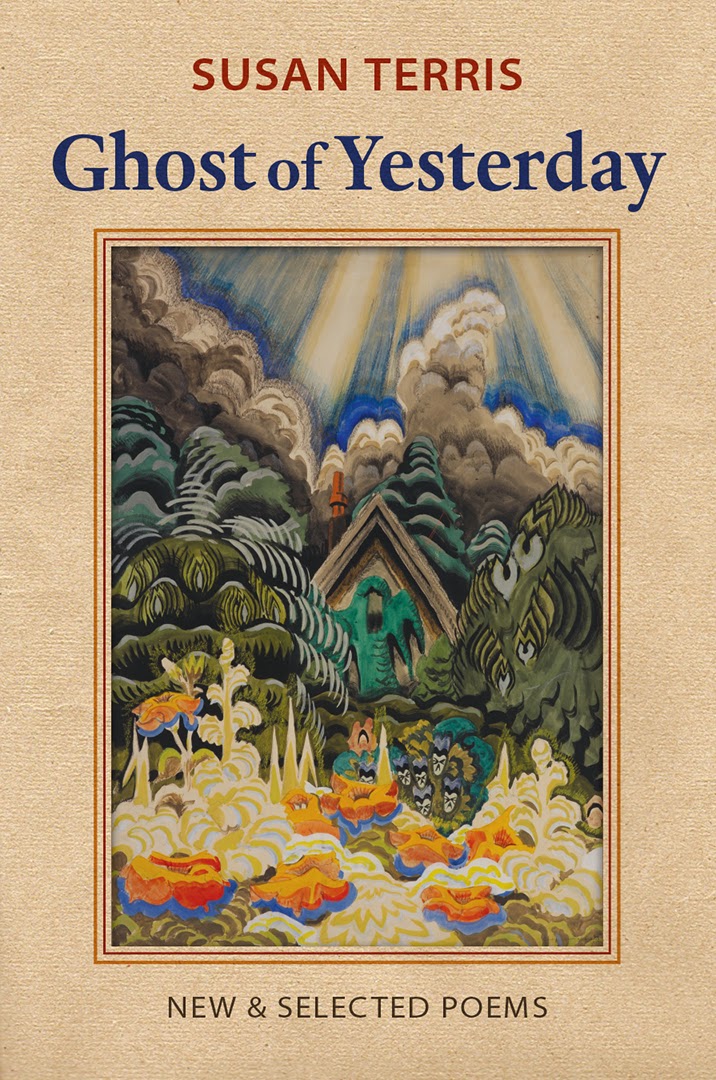 1) What is something not known or obvious about your book GHOST OF YESTERDAY, New & Selected Poems?

When I began to write the sequence of new poems that begin this book and that give it its title, I had no idea who the Ghost of Yesterday was, other than that he was a voice speaking to me of the past and of the present. I'd written about 30 of these poems when I first realized that the voice was that of my father, a man who had died more than 30 years ago.

2) What was your process in assembling a New & Selected volume of  your poetry?

To me, the process of putting together a volume that had poems from all five of my previous poetry books was daunting. Selecting the poems was difficult because I wanted the poems from each book to form a coherent whole. The poems in the sections of Ghost of Yesterday do not always follow the same sequence as in the books where they were initially published but are rearranged to relate to one another and bridge the gaps of the non-included work. I also did (though some disapprove of this) some editing of my earlier poems. Mary Mackey, who worked with me as editor on this book, was extremely helpful—even encouraging me to add some poems I was planning to omit.

Initially, finishing the book was depressing, as if I'd never write anything ever again. Then, gradually I have come to feel that I have a book with a selection that shows the reader what I have done over the past 25 years, and that has freed me to move forward and venture into new territory.

The new poems are all diptychs: two takes on a subject, two poems with the title terms reversed. You'll find a sample below—a diptych where I was finally beginning to realize that the Ghost of Yesterday is my father:

The ghost of yesterday is in the garden
Cleaning his nails with a silver file. He says

The camellias and hosta are lush this year,
But the red squirrels need to be shot.

I'm on ice skates trying to race away from him,
On stilts anxious to rise to another plane, but he

Has picked up a bagpipe and is warping and woofing
Until its clamor makes it impossible to think.

Who is that man, he barks, between the wheeze of
Pipes, and what do you think you are doing?

In the background, a chorus hallelujahs in some
Language I don't speak—Greek perhaps—

As the texture on the loom exchanges thick for
Thin. A thread breaks. Then another. Now

What? I ask the ghost, but instead of replying
With words, he uses his hands to sign. He may be

Saying sock or socket, love or lust. Looming above,
He pokes my chest with his silver nail file.

He may be saying the game is not worth the candle
Or just telling me to file this one away. 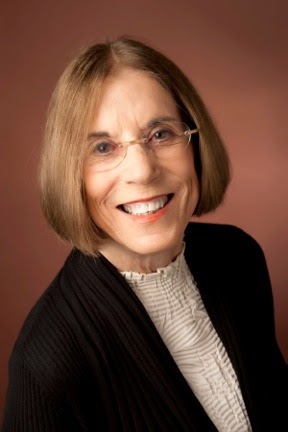 We thank Susan Terris for participating in this Q&A. You can visit her at her website: http://susanterris.com

Posted by EILEEN at 9:58 AM No comments:

ENTROPY has published "REPRODUCTIONS OF THE EMPTY FLAGPOLE," a poem written by Eileen Tabios as she read through her first Marsh Hawk Press book, Reproductions of the Empty Flagpole.

Some background to Eileen's poem-making process is available HERE. 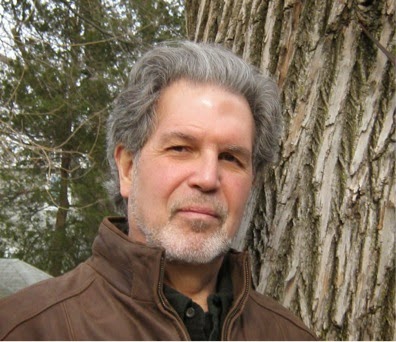 Eric Hoffman conducts an in-depth interview with Burt Kimmelman for RAIN TAXI!  Here's an excerpt from "Arrangements of Language":

I first set eyes on Donald Allen’s watershed anthology, The New American Poetry, in 1965. A decade before the Allen book, Charles Olson had published his ground-shaking essay "Projective Verse" (1950); that essay was given pride of place in the poetics section of Allen’s book. So, for a fledgling poet like myself, the question of writing free verse was not a no-brainer so much as moot (I had written some sonnets, haikus, a couple of concrete poems etc., and did get great pleasure out of set form, but was not at that time in a position to have any particular form work for me in any kind of creative or generative way). Olson's astonishing essay (to say nothing of his amazing poetry, an exemplar I took to heart) explained, so to speak, how to leave free verse behind for something rigorous but not formal in any sense except the sui generis sense—as Robert Creeley had said, “form is nothing more than an extension of content.”

To speak of how I and other young poets were transformed or at least ignited by the Allen anthology is not amenable to overstatement. We were of course reading Ezra Pound, H.D., William Carlos Williams et al. but not in any college courses because they weren't in them. I discovered Oppen a year or so later, not yet Zukofsky or the other Objectivists who were aesthetically the sponsors of that anthology; and I had met and begun a correspondence with William Bronk, and also with Joel Oppenheimer, another early mentor. Decades later, however, I gravitated toward syllabication both because I was feeling tapped out a bit with the “new American poetics,” and because I found myself wanting to respond in kind to a pond near an ocean in Cape May Point, New Jersey.

My family shared a summerhouse there with Fred Caruso and his family. One summer I started jotting down brief percepts of the life in that pond—the water, weather, and wildlife—brief statements I thought could use the unobvious rigor of syllable counting (in various patterns, sometimes of unequal line lengths—I was to settle into uniform lines, though I was appreciative of John Taggart's later reminding me of other syllabic possibilities, and on another basis of Cid Corman's cautioning to stay away from adjectives, in a letter boasting of having published an entire collection without a single one). This poetics comported perfectly with what Fred was doing. He had brought a watercolors set to the shore and decided he'd do paintings of the pond in just black and white. In conversation we realized that a collection of the paintings and poems, both about the pond, would be nice, since a shared sensibility was emerging, a quality both his water colors and my brief syllabic haiku-like poems exhibited. We worked on the poems and paintings for a little less than three years, during winters from Fred’s photos; The Pond at Cape May Pointappeared from Marsh Hawk Press in 2002. From that point in time I've been writing syllabic poetry almost exclusively.


You can see the entire interview HERE.

Galatea Resurrects #23 (A Poetry Engagement) -- edited by MHP author Eileen Tabios -- features 69 new reviews/engagements, including of four of our authors:

Nicholas T. Spatafora engages LAST CALL AT THE TIN PALACE by Paul Pines and AT THE END OF THE DAY: SELECTED POEMS AND AN INTRODUCTORY ESSAY by Philip Lopate:
http://galatearesurrection23.blogspot.com/2014/12/books-by-paul-pines-and-phillip-lopate.html 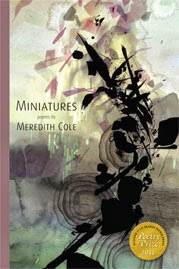 "Black Mountain Songs" which includes the poems of Basil King, receives fine coverage from both NYTimes and Wall Street Journal as follows:

Here is a Wall Street Journal photo that features Basil King, in dark shirt at the bottom left: