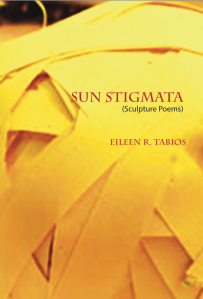 "The roses have emptied their vase" (45) leaves reader to fill in the quest: what's poem's corpus? After the authorial, author revisiting her earlier work: digs into -- not persona per se, but -- the residue of persona, found in a former self's poems. These well-lit wounds are revealed to the latter-day author through the artifact of her earlier collection Reproductions of the Empty Flagpole (Marsh Hawk Press, 2002): "What if the block of stone was a block of prose?" (11) she asks, in preface. Like their sculptural trope, the poems rework an image set (flagpoles, kneeling, the symbolic tautology of white); watch the color red revealing itself "bitter- / sweet, bloodshot, blooming / blush, brick, burgundy, cardinal / carmine, cerise, cherry, chest- / nut, claret, copper, coral, crime- / son, dahlia, flaming, florid" (70) -- an alphabetic chiseling! What lies beneath all its myriad opacity might just be meaning, that vase now decanted of rose. Ineffably, the task at hand is as untrue as materials: "For the present / is thin, and the past thick..." (86). Tabios is a poet who needn't reinvent herself; rather the span of her expression is wide, and this booked enfold takes on a more narrative aspect than other collections, often sensuous in its rend: "I'd give you / the ripest plum, ready to split / apart from a thought. I still / would be folded about your tongue" (61); other times, anguished: "familiar with departures / the loosening of embraces / the forfeiture of birth places" (60); and once more, philosophically political: "the unanswered question / will be, "Might Justice / be colored white?" (84). Remember, future reader: there may be poems more within these poems.