Marsh Hawk Press offers a "Three Questions" Series for its authors to discuss individual titles -- an index to the Series is available HERE.  We are pleased to present this Q&A with Eileen R. Tabios and her second book with Marsh Hawk Press:

1)  What is something not known or obvious about your book I Take Thee, English, For My Beloved? 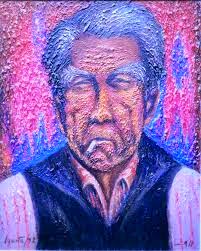 This multi-genre book offers a number of poetic series, including “THE CLYFFORD STILL STUDIES”—it’s an ekphrastic project with the poems based on images of Clyfford Still paintings that were collected in a large art monograph.  I obtained the monograph from   master colorist and Filipino painter V.C. Igarta.  He wanted to get rid of the book as he didn’t think highly of Still’s work.  He thought him overrated but he knew I was a fan and gave me the book.  I ended up writing poems whose lines followed the up and downs of colors on various Still paintings.  I don’t have the monograph easily accessible to share images but, for example, in a Still work like the one below, my lines would be longer or shorter depending on the heights of the dark areas: 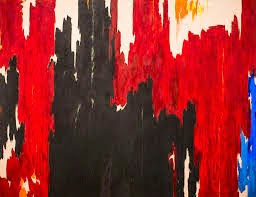 Because of the root source of my poems, whenever I think of V.C. Igarta today I inevitably think of Clyfford Still… and vice versa.  It’s ironic since Mr. Igarta professed not to be a fan of Mr. Still, as well as that Mr. Igarta’s gift gave me the gift of being able to write these poems "after" Mr. Still. 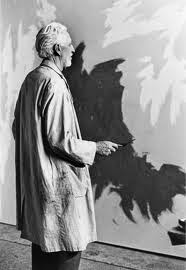 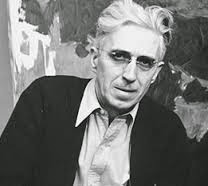 
Of course there were other influences in the making of the poems from this series, as possibly indicated by their titles:

The book—which bears the nickname “Brick”—is thick at 504 pages.  The thickness was part of my conception of the book.  In part, I wanted to disrupt the notion of the slim poetry collection which length I feel is influenced by the dross of commerce: the poetry book’s commercial market.  I also noticed that the majority of THICK poetry books seemed to be by white male poets (if not dead white male poets) and so I wanted to subtly disrupt that element.

However, this meant I was also nervous about the reactions to such a thick tome.  But enough readers have been positive about the book (for example, reactions HERE)  such that I now mostly feel grateful I pushed myself to put in one collection what could have been five different slimmer books.

I do recall that one male critic did not think highly of my decision to put my original wedding photo on the cover. I received my husband’s permission—though it came with much eye-rolling—to use his “white guy” image as a metaphor for English.  I’m not sure why the critic was disapproving. I suspect it relates to his position regarding the poet’s “I” (and so the use of my actual wedding photo was too personal) … or he could have just thought the image ugly.  But on that design decision, given the theme viz the title “I Take Thee, English, For My Beloved,” I have no regrets.

I wouldn’t say it’s my “favorite” poem from the book but here’s one of the Clyfford Still poems given my earlier discussion:

Surely a refrigerator should be consistent in containing at least four eggs, a pint of milk, a quarter-circle of brie, caffeinated coffee, a bottle of agua con gas, a modest-sized dish of “leftovers” which always tastes better the second time around
so that you can assess comfortably whether a house, say—the same point being able to be made if you live in an apartment, shack, palace, houseboat, penthouse floor of a posh hotel—is also a home
even though the best definition of home that you have ever read is “not your street address” which nevertheless makes you fling up your hands to concede some tastes are doomed to be bourgeois, especially
those things that carry the most potential for waking you up in the middle of the night, ooozzzing sweat, bedcovers flung off because you thought you heard a sound that didn’t belong in the same space where you sleep,
a space, say, like that which you have labeled “home” even though you consider home to be one of those words—or concepts—that inherently are in flux—for instance a poet’s eye—
—or Love—
and now you must leave the warm bed—the bed from which one departs prematurely is always warm, isn’t it?—to plant your soles against the chill of the floorboards
—the floor one walks reluctantly is always cold against bare feet, isn’t it?—
and as you proverbially begin to make your way down the proverbial steps you begin thinking to yourself, “It better not be the damn cat!” for if Miss Lily—again this point could be made if the cat was named Mr. Rogers, Bup-kiss, Pusa, Bordeaux or Professor William Gass—was being naughty then you would consider again whether it’s time to put the old cat to sleep, having lived for 24 human years now
(by the way William Gass wrote an absolutely terrific book, Reading Rilke, on the difficulties of translating this histrionically German—or Germanically histrionic—poet into English)
but then you stop to think halfway down the stairs, if it’s not Miss Lily then the outcome could be more dire than bringing the cat to Bide-A-Wee the next day
for night is still here, you are still standing amidst shadows afraid to continue descending and this is not a poem where you welcome the uncertainty of the outcome
and now you know why the wildest and most fierce animal with the biggest teeth ever begot by history would freeze against a spotlight
but for you there is not even the light
which matters
for light always contains some sort of Redemption

We thank Eileen R. Tabios for participating in this Q&A.  You are invited to peruse her website eileenrtabios.com